All we want to hear from government is: “The country is declared open for business as from September 1”.

Director of Inbound Tourism Operations at Routes Africa Travel & Tours, Fanie van Zyl, added that the tourism industry was resilient and could recover, provided there was certainty on reopening dates.

“There are enough health and safety protocols in place and the borders need to open,” he said.

MD of Wild Wings Safaris, Onne Vegter, agreed, noting that a document that talked about recovery without proposing imminent reopening was “worthless”.

In his 11-page document commenting on the draft plan, he noted that it had some very flawed models that were not based on the latest data from source markets.

Vegter said there was no clear metric that would be used to decide on reopening. “If certain countries will be allowed to travel to SA but others not, what metric will be used to define a source market as safe? Number of active cases? Number of daily new infections per 100 000 population? This needs to be clearly defined.”

A small inbound operator said, on condition of anonymity, that the department didn’t seem to understand that they were currently destroying the 2021 travel season.

“The 2020 year is gone, some hotels/lodges etc. may be able to keep their heads above water (just) if they put out some proper specials for locals, but right now the focus needs to be on 2021,” she said.

She said the Department of Tourism needed to understand that the industry worked on a forward-booking pipeline. “We only take our commission after our clients travel. For this reason, I don’t expect to earn anything significant until this time NEXT year, and that date gets extended the longer we don’t know when the borders will open.

“They need to set a date for border opening, even if it is only February 2021 but at least by setting the date it allows some level of forward planning to happen.”

Van Zyl also called on government to compensate tourism companies for losses during the national lockdown and to provide additional financial relief to the sector to prevent more job losses and company closures.

Industry has until August 15 to submit their comments/suggestions. A webinar, hosted by the Department of Tourism, will be held tomorrow (Friday, August 13) from 09h00 to 13h00 to discuss the proposed plan further.

Following the sharply critical response to the Tourism Recovery Plan in an anonymous letter to the editor yesterday (August 12) many in the industry responded to calls by Tourism Update to share their views on the plan.

In the interest of transparency, Tourism Update has published the comments below in full.

Onne Vegter, MD of Wild Wings Safaris summarised his 11-page comment on the recovery plan on the #tourisminmyblood Facebook page:

“While I have not read the recovery plan in full (based on comments from colleagues it doesn’t seem to warrant reading anyway) the one thing our government/tourism department doesn’t seem to understand is that they are currently destroying the 2021 travel season.

The 2020 year is gone, some hotels/lodges etc. may be able to keep their heads above water (just) if they put out some proper specials for locals but right now the focus needs to be on 2021. The tourism ministry doesn’t seem to understand that we work on a forward booking pipeline and we only take our commission after our clients travel. For this reason I don’t expect to earn anything significant until this time NEXT year and that date gets extended the longer we don’t know when the borders will open.

They need to set a date for border opening, even if it is only Feb 2021 but at least by setting the date it allows some level of forward planning to happen. On top of that, our borders being closed also affects our neighbouring countries as Johannesburg is often used as a gateway.

If they only announce the date for border opening sometime next year, then 2021 is all but down the toilet as well and a large number of establishments won’t survive. Most people aren’t just suddenly going to jump on a plane and travel for between 10 to 24 hours at the drop of a hat. Advance planning is required and no-one wants to do that or pay deposits until they know when the borders will open.

In the meantime, hotels and lodges need to put real specials out there for SA residents until the end of the year. They need the locals and a 50%-off special where the rate is still R6 000 (€300) per person per night is not going to cut it. Get the bums in the beds, include breakfast at hotels and at lodges include meals, game drives and soft drinks and give the agents/operators 10-12% commission instead of 20+ but don’t cut the agents out as that will come back to bite you in the future.

Now is the time to focus on the locals,  give them an opportunity to experience what is usually way out of their reach by offering amazing deals and keep your property afloat, even if that’s all you’re able to do.

The government needs to set the border opening date (a realistic one that’s not likely to get extended every few weeks) and let’s get planning for 2021 and 2022 to save our companies and jobs.”

CEO of Harvest Group Management, Adrienne Harris, who wrote an open letter to the Minister of Tourism earlier this year highlighting that a crisis management plan was urgently needed, had the following to say:

With regard to the Tourism Recovery Plan, I can’t quite understand what this document is intended to be. It is part strategy, part plan, part implementation plan and with most definitely a touch of reports from elsewhere.

In terms of structure, I think that the executive summary is almost sufficient to take the reader through much of the existing information. The sections from Tourism in South Africa (page 16) do not add much value, with a few very important facts interspersed among international comparisons, complicated graphs and unnecessary research from the global institutions. Much seems like yet another report looking at what the value of tourism WAS before COVID-19.

I would recommend that the really relevant facts are included in the main document (for example: Domestic trips dropped by 13.8% from 2017 to 2018 and fell short of the 2018 target by 23%) and the additional information placed as annexures. When it comes to a plan (and let’s face the fact that it is now four months down the line with little to show for it), we should know what we are going to do, why we are going to do it, who is going to do it and how we are going to it. How we are going to pay for it is, unfortunately, another discussion.

From a strategic point of view, the idea of Protect & Rejuvenate Supply; Reignite Demand; and Strengthen Enabling Capacity seems like setting very sound pillars on which to draw up a plan.

Given the late request for submissions, any comment on the plans for Phase 1 is of course, moot. I think, however, there will be room at a later stage to analyse the efficacy of the interventions. I am of the opinion that the R200 million could have been put to better use. With regard to the protocols for health and safety, this is a very good document, but it seems like an enormous amount of time was put into something where international norms were already being created. The other two recommendations – industry/government recovery partnership and a national air access team should always have been standard structures.

In terms of Reigniting Demand, the plan refers to a “robust domestic marketing strategy, the agility to respond decisively through an uncertain global reopening phase and responsiveness to changes in consumer preference that require a focus on intrepid, experiential traveller segments”.  I don’t think anybody disputes the fact that domestic travel will open up before regional or international, but I see no research that verifies the statement “Higher nett-worth, experiential travel consumers, the ‘Intrepid Traveller’, represent the highest potential segment”. In fact, I don’t see any consumer research at all. How does one develop a marketing strategy without knowing who the market is?

The third section, Recovery Phases then goes back to a more strategic approach which looks at three phases: 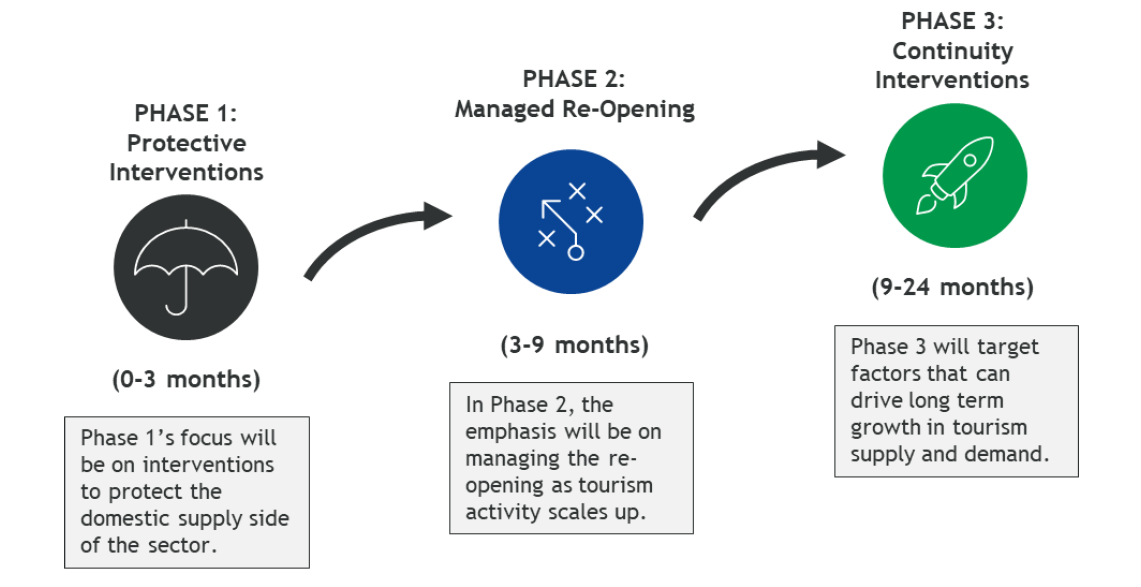 Many of the items referred to in this section, refer to activities in NDT’s current strategy and come up every year in the annual work plan. The entire document just doesn’t seem to gel as something that could be activated at the press of a button, and really gives the impression that a lot of time has been wasted in our recovery activities.

At the moment, the researchers for COVID-19 vaccines say they are throwing everything at the wall and hoping that something sticks – I think this document is doing the same.  Hopefully, we both have sticky walls.

DISCLAIMER: Please note that views expressed in letters, opinion pieces and comments expressed are solely those of the author and not necessarily that of Tourism Update. Robust debate is encouraged.